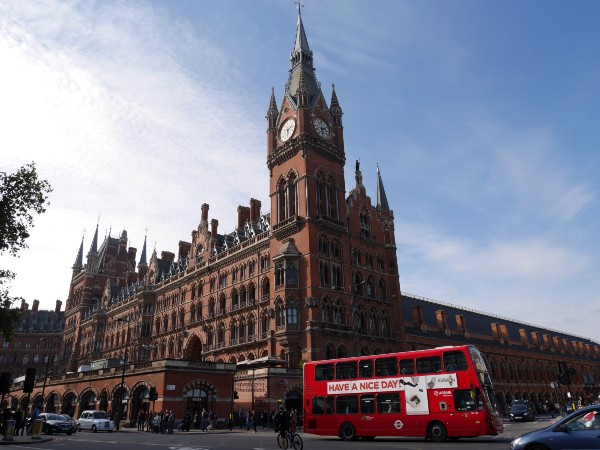 My original goal with this publication was to not be a “traditional” travel blog with just commentaries but lacking of genuine experiences and stories. However, I have to admit that stories take a long time to write and revise. In between that, I feel the need to jot down the day-by-day about my travels before my memory fails me.

So enjoy, here is the abridged version of my UK trip journal.

Date: 10–11 October 2015
Location: Singapore — Frankfurt — London
Logistics:
* Transport: Lufthansa flight via Frankfurt, tube ride from Heathrow to King’s Cross
* Lodging: Tune Hotel King’s Cross
What I saw and did:
* British Library
* British Museum
* Walking to Trafalgar Square (super packed, there was a Diwali celebration — 1 month early apparently!)
* Walking to the Embankment, and then along the river to Big Ben / House of Parliament
What I will always remember:
* Giggling when hearing “This is Piccadilly line train to Cockfosters,”.
* Randomly joining a guided tour at British Museum about the Assyrians, because I happened to be standing near the start point and the guide asked me “Are you joining the tour?”
* Leicester Square was full of smokers.
* I somehow made it to Chinatown without directions, while walking aimlessly. Must have been the calling of my ancestors.

Date: 12–13 October 2015
Location: London
Logistics:
* Transport: just me and my oyster. London was my oyster.
* Lodging: Tune Hotel King’s Cross
What I saw and did:
* Shopping at Jermyn Street and Oxford Street
* Tower Bridge
* River Cruise
* London Walks — Westminster
* Royal Mews
* Buckingham Palace (gate)
* Westminster Abbey
* St Paul’s Cathedral
* Tower of London
What I will always remember:
* How f***ing pooped I was.
* Climbing what must have been 1000+ steps to St Paul’s Cathedral dome and regretting it. I guess I should have felt accomplished but nope 🙁
* Meeting up with my friend Hendri and eating one of the best fish and chips in town. Still dreaming about its battered sausage and onion rings.
* Seeing horses and a carriage making circles at Royal Mews, thinking they were just doing routine exercise. And then seeing the very same horses and carriage entering Buckingham Palace.
* The very pleasant park / garden inside Westminster Abbey.
* Seeing still-working gas lamps on the one of the first streets in London (you’ll have to join London Walks to know which one).

Date: 14 October 2015
Location: Edinburgh
Logistics:
* Transport: Caledonian Sleeper between London and Edinburgh, Edinburgh Sightseeing Bus
* Lodging: Ibis South Bridge Edinburgh
What I saw and did:
* Hollyrood Palace
* Edinburgh Castle
* Royal Yacht Britannia
What I will always remember:
* First time ever taking a sleeper train. It was cozy but the carpet was disgusting. Breakfast on train was nice. Forgot my watch and necklace, luckily they were the cheap ones.
* Climbing up The Scotman’s Steps in order to get to the hotel from the train station. Passed by homeless people. The whole steps smelled like piss.
* Got lucky and got to have early check-in to the hotel and had the much needed shower.
* Stopped at “Edinburgh Castle” bus stop. Could not see the castle. Asked a guy. He pointed to the hill. Ugh.
* Had scone and tea on board the former royal yacht, overlooking the Port of Leith. I might have done the trip on a (relatively low) budget, but that moment was a splurge moment and I never felt as fancy before.

Date: 15 October 2015
Location: somewhere in the Highlands, and Edinburgh
Logistics:
* Transport: Scotline Tours
* Lodging: still Ibis South Bridge Edinburgh, which I think is my favourite hotel from my trip
What I saw and did:
* Highland tour (the original one, apparently)
* Loch Ness and a cruise across it
* Urquhart Castle
What I will always remember:
* The total silence I experienced as I came out of Urquhart Castle visitor information centre to the castle grounds by the Loch Ness.
* Meeting another solo female traveller from Italy, ended up getting back to Edinburgh with her and now we are Facebook friends.
* The Highlands tour guide kept emphasizing that we should not miss the cruise boat because if we missed it, he would not be able to pick us up. Then he told a story about some tourists who missed the boat and took taxi all the way to Edinburgh and spent 300 pounds. Needless to say I and the aforementioned Italian traveller were the second in line for the cruise boat.

Date: 16 October 2015
Location: York
Logistics:
* Transport: Train (Virgin Trains East Coast) from Edinburgh to York, plus York Plusbus
* Lodging: Lovely AirBnB with the sweetest host and the sweetest cat. (Use this link to sign up for AirBnB and get $28 off)
What I saw and did:
* York Minster
* York Railway Museum
* Basically just walking around York
What I will always remember:
* Some guy barked at me (like, literally barking like a dog) when I was walking to York Minster then ran off laughing. ????
* The stained glasses and the Chapter House at York Minster were just exquisite. Can’t really express it with words.
* I managed to go into the quire of York Minster just before I joined the guided tour. It turned out the quire and its surrounding area were closed later on as there was a wedding to be held. Managed to see the bride as she walked into the church. It was lovely.
* I never really knew how much I like trains until I went to York Railway Museum!

Date: 17–23 October 2015
Location: Bournemouth
Logistics:
* Transport: Train (Virgin Trains East Coast) from York to London, tube from King’s Cross to Victoria, Coach (National Express) from London Victoria to Bournemouth. Oh yeah you know this is gonna be DRAMA.
* Lodging: Bournemouth Highcliff Marriott Hotel
What I saw and did:
* Work
* Work
* Seriously, it was mostly for work
* Bournemouth Oceanarium to see penguins
* Bournemouth Pier
What I will always remember:
* All the drama and rushes during the journey from York to Bournemouth: train delayed for about 15 minutes into King’s Cross, my oyster card ran out of money and I had to queue for the top-up, the left luggage staff who couldn’t find my luggage at first, and narrowly missing the coach to Bournemouth.
* My lovely colleagues who took great care of me, and the vast space of my office location over there.
* The sunrises / sunsets were always lovely by the shore.
* I thought since it’s a seaside city it might be flat just like Singapore but oh no, it was hilly and cliff-y.

All in all it was a pretty eventful trip, I’m glad to have had the time by myself to explore!

Tiny question to you guys — do you like the photos slides just as it is now above, or would it be better if they have captions? Let me know!

All text and pictures copyright by author