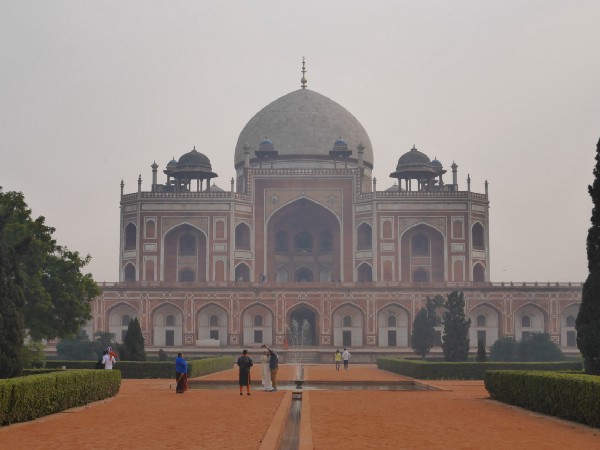 You are many things

and I’m sorry if I ever thought otherwise

Today we finished up the main sights in Delhi. Humayun’s Tomb, India Gate, Lotus Temple, and Qutub Minar. A lot of them were from the times of Mughal dynasty which was a Muslim kingdom. We also went to the New Delhi part which was mainly built by the British, however we did not go in to any of the buildings. If I’m not wrong it was temporarily closed because of rehearsals for India Republic Day.

The Qutub Minar has motifs relating to both Hindu and Islam. The Hindu carvings actually reminded me of the carvings on Bali Hindu temples. It made me marvel at how far those people and their religion went. And how it is very much still alive in Bali, thousands of miles away.

We then moved on to Humayun’s Tomb. Humayun’s tomb was built by King Humayun’s widow. The guide kept talking about the difference between the tomb and the Taj Mahal.

My sister and I joked that the widow probably drove a hard bargain and therefore got a better deal, and probably used the extra money for something else.

Lotus Temple was beautiful from outside but again there was a crazy queue and we were not keen to join as we had heard there was nothing much inside except for a prayer hall. Furthermore people were not allowed to take pictures inside. We did a quick photo-op and moved on. I still have not heard or learnt much about Baha’i faith but I’ll attempt to later on.

I have to admit that my pictures of Lotus Temple did not turn out satisfactory. So please enjoy this photo by Jay Galvin instead. (Available under CC BY 2.0 license)

We then wanted to go to Akshardham complex but the sheer volume of visitors really turned us off. Apparently it was the last day of a long holiday so a lot of people were making good use of the day. We only managed to take a picture with the temple as the background.

Akshardham complex. See if you can see the swarm of tiny people at the background!

Afterwards, we then decided to go to the Sikh temple right in the middle of Delhi — Gurudwara Bangla Sahib. It was quite eye-opening. We had a lovely Sikh man who volunteered to bring us around the temple and the free public kitchen that runs around-the-clock to feed whoever needs it (this is called Langar). All of us were struck by the sincere hospitality which may seem rare to find in India, and the world for that matter.

The more I explore India the more my eyes are opened to its diversity and nuance. It is not fair that the world puts India in one box. India is many things. Way more than they can cram into a little exotic box.

Tomorrow is a long drive and I hope I’ll survive it. And I will try to keep positive and enjoy the travel as it goes.

Have you been to India? How did you find it? Feel free to respond.  If you like this piece please consider hitting the Like button, it means a lot to me! Want to share this piece? First of all, thank you! Share buttons are at the bottom.